Derived from an article written by Ted Cushman – Contributing editor Ted Cushman reports on the construction industry from Hartland, Vt.

The recent pandemic has had many ripple effects on the US economy. Along with other factors, it has affected the supply of framing lumber in American lumberyards. Restricted supply of US and Canadian lumber has led suppliers to look to Europe for wood to satisfy the high domestic demand. That means lumber produced in Europe has been showing up in US lumberyards and home centers. It may have different qualities than lumber from North America.

Background. Most lumber in the world market is visually graded. A lumber grader at the sawmill look at each piece and sorts the wood based on visual qualities—in particular, the size and number of knots in the wood. This characteristic is of aesthetic importance, but it also makes a difference in the structural performance of framing lumber in service.

The structural strength of lumber also varies widely by species and where the wood was grown and harvested. That’s why a grade stamp on a piece of framing lumber will specify the wood species and region of origin, not just the visual grade. Sometimes, species are grouped based on their similarity in structural performance. So, you may see a piece of wood marked SYP for southern yellow pine; this designation could refer to several different species of pine that grow in the southern US. “Hem fir,” by the same token, might be hemlock or fir; the two species have comparable performance.

The common species and species groupings in the US market are routinely tested for structural characteristics under a lumber grading program developed by the American Lumber Standard Committee (ALSC), a voluntary standards group based in Washington, DC. The ALSC publishes design values for the various species and grades of lumber, and engineers use those values to design wood structures. 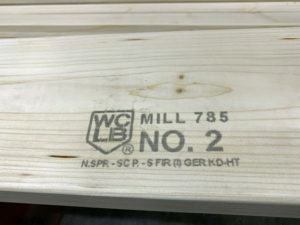 Multi-species wrinkle. Mills in the US usually process wood of a single species or species group from a single region. But imported European lumber appearing in the market these days comes from mills that process multiple species grown in multiple regions. So, for example, wood may bear a grade stamp indicating that the lumber could be

The mill happens to process all those different kinds of logs.

The wrinkle is this: The various kinds of wood coming out of European mills may have very different structural characteristics, even if their visual grading is very similar. While a piece of wood might bear a “Number 2” grade stamp based on its visual characteristics, engineering properties will differ. Properties such as fiber stress in bending, modulus of elasticity, or density (specific gravity) could vary widely within lumber supplies that bear the same stamp. This stamp complicates things for engineers and code officials trying to design or inspect structures built with this Euro lumber. 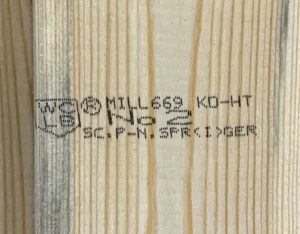 The wood species identified on this grade stamp are woods processed at a German mill that are not among the four North American categories that the ICC building codes recognize.

Today, the ICC codes in the US don’t formally recognize all those European species and countries of origin. Tables in the IRC refer to four North American categories: southern yellow pine (SYP), Douglas fir, hem-fir, and spruce-pine-fir (SPF). Requirements in the code are based on those species and the properties that go with those species. SPF is the weakest species grouping among the eight design values that engineers use in wood building design. 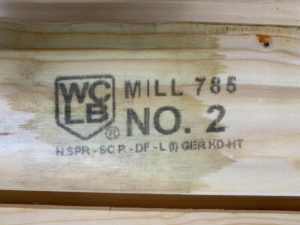 Design values have been published for the European species now appearing in the US. But the design process is complicated by the mixing of species and countries of origin within one grade. To figure out the value for a given design problem, an engineer would have to look at each design value for each imported wood species and select the lowest value for any given property.

Significance to design engineers. In many cases, the design values are lower for the Euro wood than for SPF, the weakest North American category listed in the IRC. In the case of shear wall and connector performance, specific gravity is a controlling factor.  The specific gravity influences fastener performance; the weaker Euro woods could significantly reduce the capacity of a shear wall. Similarly, specific gravity affects the gripping strength of truss gang nail plates. More fragile Euro wood could substantially compromise the resilience of critical truss connections if the design software is not adjusted to take the wood variations into account. And in high-wind regions, the bending strength of lumber is significant for the resistance of walls to the lateral pressure of the wind.

Unless an engineer can determine that import lumber is adequate for a given design, there is a risk that the structure as built may not comply with the code. A recently released addendum to the 2018 Edition of the Design Values for Wood Construction allows engineers to evaluate a design built with European wood varieties. In many cases, the design values for the European lumber currently circulating in the US are lower than for spruce-pine-fir, the weakest code-listed US category.

Significance to builders. Up until now, this lumber strength issue may not have had a recognizable importance to builders. But the problem has been circulating in the code enforcement community and is being noticed by code officials. In the future, inspectors in the field could be flagging critical structures, such as shear walls, constructed with lumber that bears an unfamiliar stamp.